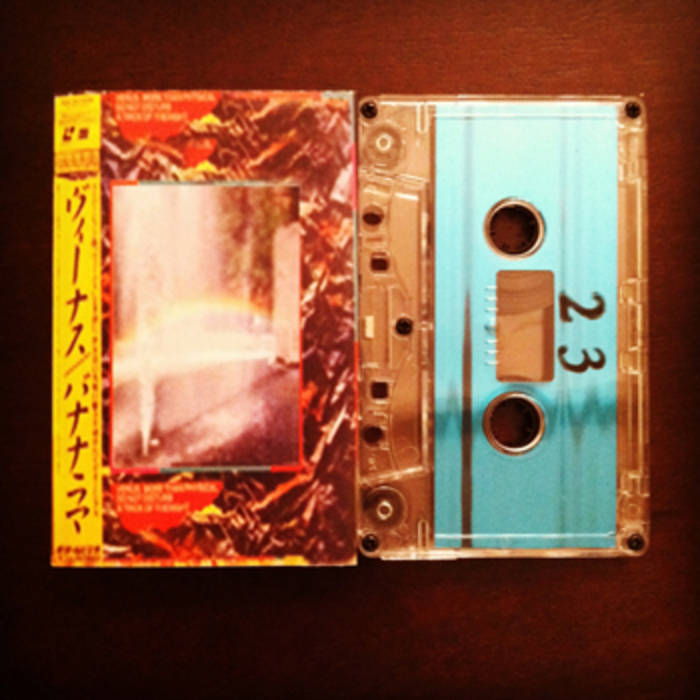 Orange Blossom Flyover and Daytime Television commit to 23 ☯ 45. A split tape featuring the light head bopping anthems of Orange Blossom Flyover. Distant vocals that spiral through your mind as the soft beats and guitar rhythms dance across the airwaves. Daytime Television brands their own style of mixed media sounds and tripped out effects. Wandering noises meander and trickle through the speaker. One remix by Julia LaDense rounds out a soothing release. Limited to 30 chrome tapes on blue foil.

Art: The title of this album may require some history prior to explaining the artwork. Jono Mi Lo (Daytime Television) had some sort of obsession with Michael Jordan, and since we couldn't think of a good name for the album, the idea of using Jordan's two numbers, 23 and 45, with a ying yang symbol seemed appropriate as anything. I think the ying yang symbol was used because Jono had recently showed me how to make that symbol on Facebook. I think you can imagine though, how the idea of the ying yang symbol may also have an unexpected meaning considering the usage of 23 and 45. So we ordered these beautiful blue foil cassette tapes and hand stamped 23 on one side and 45 on the other. I cannot recall which was which, but I never explained this to Orange Blossom Flyover, so I always wondered if he got it or was just confused. I think he is a sports fan so lets just pretend he got it (although he is from Massachusetts so I'm not so sure). Like many ihaa releases, Justin did the layout. Jono sent an image for the cover, it appears like a mirror but its so pixelated I couldn't tell for sure. It has some Japanese writing on it. I haven't a fuck what is up with it today and when Jono sent it to me originally I sent it back saying "300 dpi or higher Jono" (that is my equivalent to the IT person saying "did you try turning it off and back on again?"). Jono quickly replied it was intended to look that way. I'm thinking well fuck, people are going to buy this and think "wtf" - so here I am wondering if people are going to understand my contribution to the release, its title, and I don't understand the actual artwork. Whoa - how fucked is that? So its like the most misunderstood release in the history of releases already, not like it matters, but to make matters worse, the whole ying yang symbol proved to be more difficult to "type" that originally thought. So you may see 23/45 or 23 45 or 23 - 45 or 23 ying yang 45 as the title... you may be just as confused, you may wonder why I'm writing this... at this point I'm not sure anymore. The inside cover is a photo of a basketball hoop. I took that. Its the hoop next to the playground I walk my son to on nice days. I thought it would maybe tie in the whole basketball theme. Using Illustrator I inputed the song titles. I'm not sure if they were very readable, and it didn't disclose which artist had side A and which had side B.