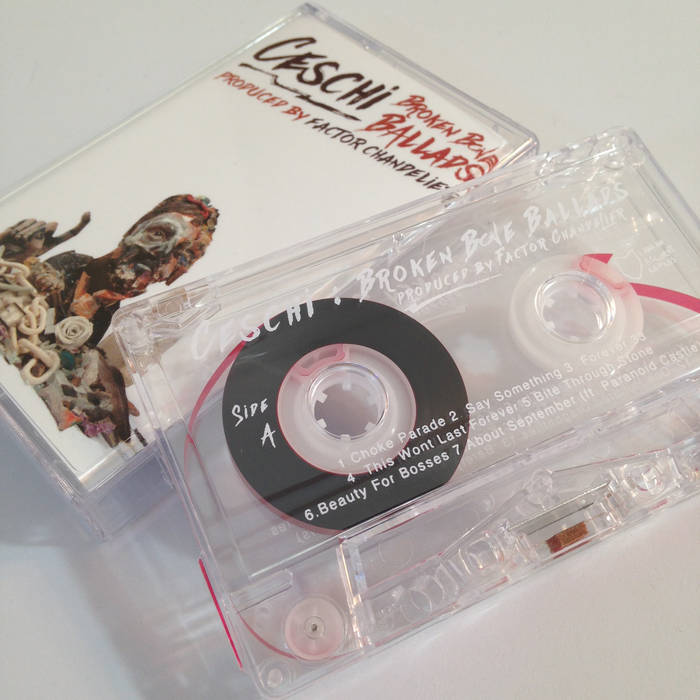 Bloodmon$y Perez No one writes like Ceschi does. He is one of the best singers, song writers, performers and artists ive ever followed. I support anything he's done. Favorite track: Forever 33.

Cassette limited to only 100 copies! Includes a bonus track.

Broken Bone Ballads, the fourth LP from New Haven's Ceschi Ramos, was written from the perspective of a man battling in court for over three years and anticipating a prison sentence while trying to maintain an indie record label and pay bills as a working musician out on bond. The album draws its title from a 2007 arm wrestling match with a Marine at a house party in Hawaii that left Ceschi with a spiral fracture of the humerus.

Accentuated by Saskatoon producer Factor's first foray into acoustic minimalism and a host of talented background players and vocalists, including a powerful guest verse from Sage Francis on ''Barely Alive,'' Ceschi's narratives explore the plight of the modern working musician, the drop-in-the-ocean nature of pouring one's life into art in a disposable digital age, and the eternal tug-of-war between despair and hope.

With a sound largely eschewing the contemporary standards of drum machines and trap rap, Broken Bone Ballads relies on manipulated live instrumentation, analog synths, and samples as it moves seamlessly from breathless bars to acoustic punk-influenced folk. The 12-track album was inspired by community, mothers, girlfriends, fellow musicians, the writings of Xose Tarrio Gonzalez, Mayan artwork at the Yale Art Gallery, the loss of some of the most important people in Ceschi's life, and a dehumanizing prison stint on dubious marijuana charges. With lyrics channeling Jeff Mangum (''Bite Through Stone'') and a delivery reminiscent of Freestyle Fellowship (''Forever 33''), Ceschi voices his frustration with a rigged system that ensures a life of groveling servitude for most and greedy excess for a few (''If a CEO can make billions / Then the world we know is filth ridden'') while holding out hope that through solidarity we can prevail (''All these tiny teeth together can bite through stone''). Ceschi meditates on the suffering he has experienced personally and witnessed on the road and in his community from junkies detoxing in jail cells, undocumented worker wage slaves, and corner boys running the 4AM New Haven streets.

Broken Bone Ballads is simultaneously Ceschi's most personal effort to date and a collection of stories and sketches that parallel the broader concepts of human suffering, failure, uncertainty, and perseverance.

Cover and all sculptures by Derek Weinberg (derekweisberg.com)
Design by David Jaguttis (319heads.com)