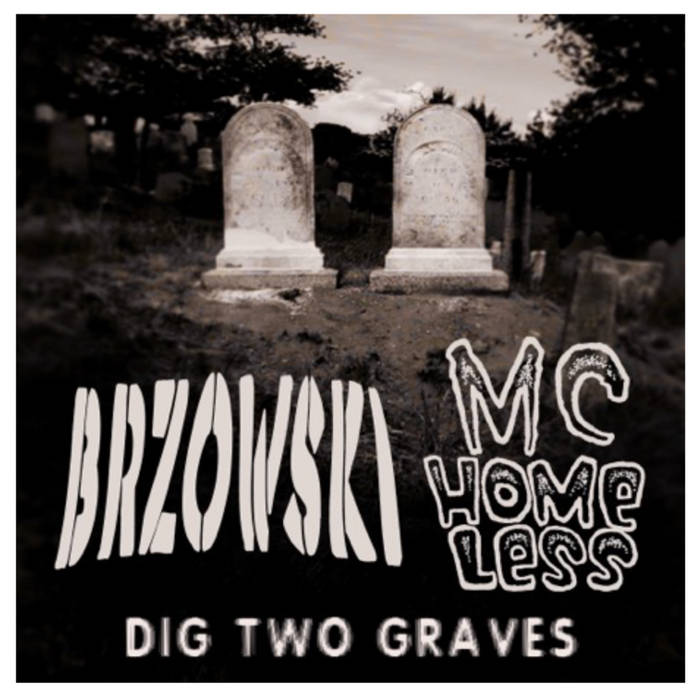 magichateball Holy shit! This whole album goes hard! From The New Flesh all the way thru I Am The Wind. Not a weak song in the bunch. 10/10 Favorite track: Annie Lennox.

In the punk-derived tradition of split-releases, Dig Two Graves pairs a trio of new songs from Portland, Maine purveyor of
dour verbosity BRZOWSKI with the first new recorded material from erstwhile Ohioan MC Homeless. Old friends who have shared
stages across the US and Europe, these two both share an affinity for indie-rap, punk rock ethos, and a nostalgia for the schlocky
horror of the 70s and 80s.
BRZOWSKI sculpted the majority of the lyrics for this release immediately following the sessions for 2017’s acclaimed opus
of personal ghosts and political realities, ENMITYVILLE (MP066). An indie stalwart with many noteworthy credits under his belt,
BRZOWSKI has not slowed his pace of peculiar catalog pieces in the space between solo offerings, to which DIG TWO GRAVES is the
latest addition. The lush production provided by C Money Burns + BRZOWSKI ( as Vinyl Cape) and 80HRTZ deploys samples evenly
with live instruments, woven in layers thickly appropriate to the nature of the lyrical approach. These three new songs, distinctly
“Goth-y” in nature feature Maine songstress Renée Coolbrith, and the singularly strange sounds of avant-vocal performance artist
The Asthmatic, along with a “cover” version of The Conqueror Worm by Edgar Allan Poe. The overt politics and personal revelation
of the ENMITYVILLE album have given way to a trio of songs about Flesh, in a critical, Gothic-Romantic, and observational capacity.
Native son of the rustbelt, and no stranger to indie-rap from the basement up, MC Homeless is back after 6 years of selfimposed
musical exile. Since his classic 2010 album 27 (MP035), he’s toured through 20 countries, and subsequently “retired” from
rapping for a spell to direct and produce the critically acclaimed punk/hardcore documentary Destroy Cleveland. Returning to the
microphone after a six-year hiatus, the material on DIG TWO GRAVES serves as the debut of a sonically harsher, more
confrontational, and in many ways a loudly retro nod to hardcore 80’s/90’s Shock Rap in lyrical content, if not aesthetic. San
Antonio’s rising star of ardently queer rap, Chris Conde contributes a scathing verse to Dead Rappers, and all noise-laden production
for Mc Homeless was contributed by the mysterious and unheralded upstart Death Woods.
milledpavement.com