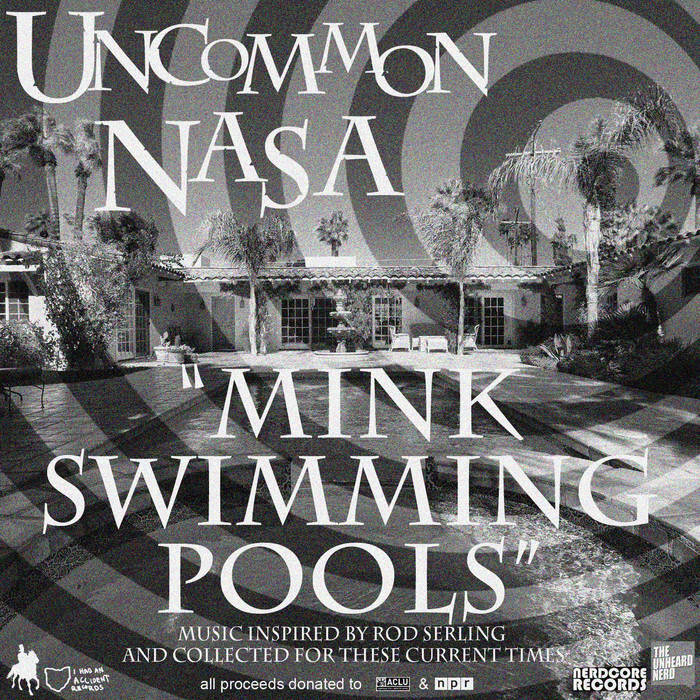 Alex Anissimoff Vaulting is one of the most hardcore rapbeat-ever+ nasa kills it, Perchance to Dream is a classic nasa "get you thinkin" track...of which he is master ..love the bassline too remindes me les claypool Favorite track: Perchance to Dream.

"It's not just a man's right to involve himself in the problems of this moment, whether he or she be 18 or 78, it's a duty, an obligation, a necessity. To know and not to care, that is the ultimate in obscenity" - Rod Serling

Mink Swimming Pools is brought to you by Uncommon Records and Nerdcore Records, as well as exclusively on cassette by I Had An Accident Records.

This project is "Pay What You Want", but we encourage you to make your own donations to ACLU and NPR through this album and give as much as you can.

All proceeds from the release of Mink Swimming Pools will be donated to the ACLU and NPR, two organizations that in light of current events in the US can use our help over next four years. Rod Serling's work most often had an underlying tone of social justice in it and causes like civil rights, quality and honest broadcasting were important him and his work.

His work on the Twilight Zone among other television and film scripts is as vital and relevant today as it was in the 1950's, 60's and 70's. He was quoted referring to Hollywood as "The Land of Mink Swimming Pools", thus the title of this limited edition collection of songs. The Cassette run of Mink Swimming Pools will be limited only to 50, and it's digital online presence will only exist for 2 months after it's release on January 20th, 2017. After March 20th, 2017, this release will be removed from the Uncommon Records bandcamp. Cassette will be available at the I Had An Accident bandcamp and when the 50 sell out, they will not be getting re-repressed.