by The Switchblade Dicks 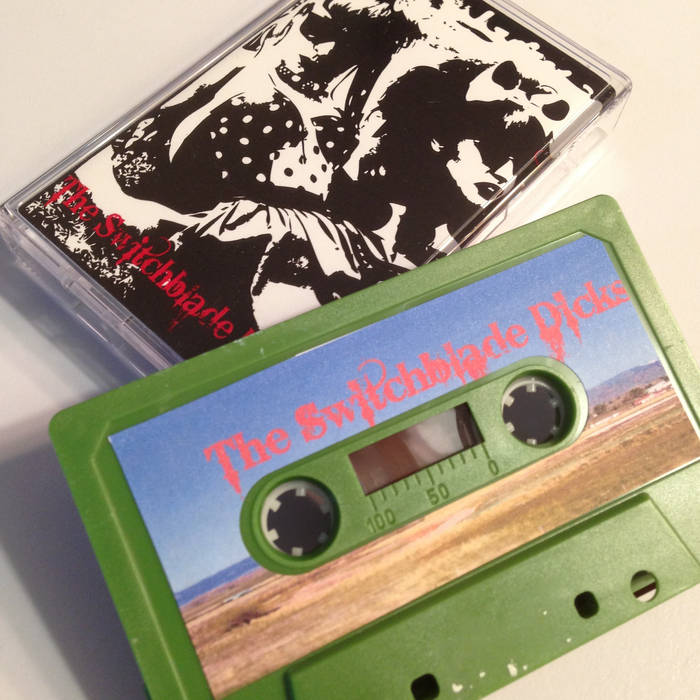 Disclaimer: The New Sound was written and recorded by two dicks in a basement apartment in Chicago Il between the hours of 1 AM and 4 AM while extremely drunk. The recordings sound like two dicks that are too drunk to perform and play their instruments. Although some may claim this is a pure stroke of genius - as lyrically Justin's introspection into his own life, future, and attempts to drown his ghosts with alcohol... the result is an often unspoken truth. Embarressing because of how honest these songs are. They truly are like nothing else. If you are hoping for a polished sound please refrain from wasting your money... only those that are truly fans of this style of sound should be interested in purchasing this.

Art: The New Sound was originally released as a CDr in 2006. Then label co-owner Seamus developed an idea that, to recollection, featured a photocopy of Jesus on coral color paper. Using a sewing machine Seamus folded the photocopied paper and sewed the sides to create a CD case. Recollection does not take me as far as what inserts were involved, however every aspect of the art was created by Seamus.
When the album was re-released onto cassette, Justin created the layout and concept. The labels were from a photo Justin or Alex took on their journey to find inspiration to write The New Sound. I believe the photo is of South Dakota or Wyoming. Side A reads "Switchblade Dicks" and side B reads "The New Sound". The cover features two girls that are part of some punk band that had switchblade in their names. Justin used a really neat application called Adobe Photoshop to change the color of that photo to black and white. A very precise technique intended to give the image a photocopied look that would resemble the original art, if only ideologically. The inside cover featured some dick on a motorcycle with a couple fatties (heavy females) or something with the track titles written on top.